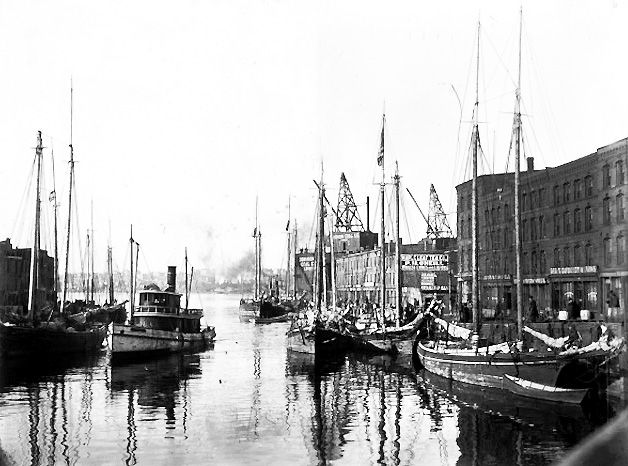 Fred Hyatt was a prominent union organiser and uncompromising socialist who fought for the rights of his fellow workers in Calgary and New Brunswick in the years before WW1.

Followers ginandgenealogy know about Great Uncle Charlie, the second husband of my Great Aunt Mabel Sarah Lockwood. Charlie was a fascinating character with his music, poetry and love of nature.  Mabel’s first husband Fred was an altogether different person. A fiery, eloquent and determined leader, he is no less interesting than the man he ‘gave a hiding’ to for taking his wife.

Mabel married Fred Hyatt in 1902 in Fulham London.  He had recently left the army, having spent twelve years with the Somerset Light Infantry, seeing service in India and the East Indies.  They had their son Victor in 1903 and left England for Canada in 1905.

They sailed from Liverpool to the East Coast of Canada and travelled onto Calgary in Alberta. The City was experiencing an economic boom, factories were expanding, new housing was being built and there was plenty of work.  Britons seemed to have been very aware of the employment opportunities in Calgary as they outnumbered all other nationalities living in the City by 1906.  This era of industrialisation meant there was a large working glass and this saw a rise in labour unrest over conditions and pay.  Calgary became a centre of working class activism and Fred was soon ‘radicalised to the cause’.

Canadian labour history is a regional story and at this time the Labour Congress of Canada formed a policy of encouraging affiliated unions to create full provincial federations of labour.  British Columbia unions formed a Federation in 1910 and Alberta in 1912 and New Brunswick was the only other province to implement this before WW1.

It is therefore, no surprise that after travelling back to London to seek a divorce from Mabel for adultery in 1909, he almost immediately returned and settled in New Brunswick with his new wife Clara and his son Victor, who he had removed from Mabel and Charlie at their last meeting. He found employment on the waterfront of St John’s as a longshoreman. In 1911 Clara gave birth to Frederick William and in 1914 she gave birth to twins, although only one of them, Ernest Walter survived.

Fred was now an inveterate Socialist who believed that organising workers was part of a larger effort to reform Society. He believed capitalism was in full force in New Brunswick and that work was needed to ensure the workers mutual protection. He became involved in the merger of three competing longshore unions into a single Association in 1911 and voted to affiliate to the powerful International Longshoremen’s Association.  Fred chaired the merger committee and quashed all opposition with his articulate manner and Socialist rhetoric.

In the following years he was involved in the further organisation of waterfront groups such as the coal handlers, tugboat firemen and dredgemen. Fred was an executive member of the New Brunswick Federation of Labour by 1913.    Inflation was high and several of these newly organised groups waged brief successful strikes to win higher pay and closed shops. After the coal handlers won union recognition, double pay for Sunday and holidays, paid meal breaks and 35c an hour Fred told a meeting “I think this is pretty good considering that we have only been organised for four months”.   At times Fred even advocated violence saying that workers would be justified in taking up their rifles in a revolutionary situation if the capitalists refused to give up the “reigns of government. On the eve of WW1 casual labour on the waterfront was more highly organised than it had ever been.

At the outbreak of WW1 Fred succumbed to Patriotism and joined the Canadian Expeditionary Force in May 1915. In August, Fred experienced a few minor health problems but despite being an older soldier he had been passed fit, promoted to sergeant and set sail to France on active service.  In April of 1916 shortly after having landed in France he was taken to hospital at Le Havre, uninjured but in a nervous state and experiencing symptoms of numbness in his hands and feet, joint pain and a paralysis down the right side of his face.  The diagnosis was ‘tabes dorsalis’ or tertiary syphilis, a slow degenerative disease which is a result of an initial syphilis infection being left untreated. It can lie dormant for many years and according to his medical records Fred had experienced such an infection twenty years before.  He was sent to England, passed unfit for further service and set sail back to Canada

In his book “Fight or Pay’: Soldiers’ Families in the Great War” Desmond Morton writes that Fred returned home from the WW1 with progressive ataxia to a gratuity of $100, no pension and no job. Before the war he had been earning $75 a month.

Despite paralysis and pain Fred lived with his degenerative illness for another 30 years. He became a farmer and continued with his sons, until his retirement.  He died in August 1949, aged 75. The cause on his death certificate is simply “syphilis”.   He is buried at St John’s Church Cemetery, White Coves, New Brunswick with his wife Clara who died eighteen months later.